She is fondly called Honey by her parents and slowly she came to be known as Honey to many others than her real name Deepshikha Deshmukh. But in 2016, the world came to know her name officially as the producer of the critically-acclaimed film Sarbjit, which featured Aishwarya Rai, Randeep Hooda and Richa Chaddha in lead roles.

“Even though both of us (she and her brother) were in the filmmaking process with papa but to be there for a film that both of us believed in, we walked the red carpet (Cannes Film Festival) for the first time. To represent a film from India at that platform made us proud,” said Deshmukh in an interview with SheThePeople.

Film producer Deshmukh comes from a family of producers and actors. Her father Vashu Bhagnani is the head of Pooja Entertainment which has produced films like Coolie No 1, Bell Bottom and now Tiger Shroff and Kriti Sanon starrer Ganapath. Her brother, Jackky Bagnani is an actor, who made his debut with the film Kal Kisne Dekha Hai in 2009 and since then has also been part of the production team and acting.

Deshmukh started working at the age of 16 years. She had just finisher school and classes at college used to get over by noon. She used to ask her father for work. She followed him around with a planner and used to diligently take quotes from the people, who had called him.

As time progressed, she started assisting him. “I helped with some film, designing and started doing a little bit of construction. I had my own home store after that,” she said.

She was used to be part of other films but Sarbjit was a genre different from what Pooja Entertainment was used to making mass entertainers. But when both she and Jackky heard the script, it struck a chord with them as it was an emotional story about a woman trying to bring back her brother.

Producer Deepshikha Deshmukh is not married to a particular genre. But for her, it is important to make films that will make someone’s day and to be so sure of the message that she and the production company put across.

She believes that films have a direct impact on people. “One needs to be careful of the kind of narrative they are establishing. We made films like Madaari, Sarvann, amongst others. We have to have a social message. For example films like Bell Bottom, which was inspired by a real-life hero. Then we also have very entertaining films like Coolie No. 1. People really enjoyed the music and the colour,” she said.

With Sarbjit, Everybody Came To Know My Name: Interview With Deepshikha Deshmukh

As a woman, Deshmukh would like to bring to the table a lot more female-oriented stories.

“There are such brilliant unsung women in the world and I would love to put their life on the big screen and celebrate them,” she said.

As a production house, Deshmukh believes that one can not focus on making cinema just for OTT because it is the new normal. Each one of them has to adapt to whatever comes their way.

“When we released Coolie, we knew that the pandemic was not going to get over and it was new for everybody. Nobody knows what it is going to do now. That is why we released Coolie No 1 on the OTT platform. Whereas when it comes to Bell Bottom, we wanted to stick by the exhibitors. We wanted to show solidarity. We waited for the release and it came to theatres. Then, on the OTT platform. It was mutually gratifying because it was appreciated on both the platforms,” she said.

According to Deshmukh, the films and choice of subject are changing creatively. “As a filmmaker, she would want a film to reach as many people as it can through different mediums. But now people have started consuming so much content on OTT that to bring them out to theatres, you need to show them a larger than life film or you need to show them something that they cannot experience on their tabloids or small screen,” she said on the increasing popularity of OTTs and pandemic affecting the theatrical release.

The production house has not yet started delving into OTT as of yet. “Lot of our projects are in the pipeline and we are planning to get into it. But most of the films that we made and planned were pre-pandemic. All of them were planned with keeping the theatrical release in mind. But we were lucky that there was an OTT platform too,” she said.

Going to Cannes, after just having her first kid was a euphoric moment for her. She remembers calling Manish Malhotra for a gown. “I still go back and see my red carpet images and I remember making that call to Manish. I had just had a baby and I had belly fat. I wanted him to give me a gown because I am too excited. It was a great experience,” she said. 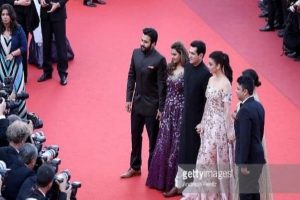 Talking about life after that, she discussed the love she felt after marriage with her husband and how it evolved with her pregnancy, the first time. Just when she thought this was it, she became pregnant again and felt joy all over.

Deepshikha is married to Dhiraj Vilasrao Deshmukh who is a member of the legislative assembly from the Indian National Congress (INC) from Latur Rural. He first got elected in 2019.

“It was life-changing for me because I suddenly felt responsible for everything that was in my arm. When I thought that this is it and I cannot feel love more than this, then I got pregnant a second time and I had the same feeling again. The two of them are my life and they make me want to work harder, leave behind a cleaner planet and leave behind a better legacy. Thanks to them that I am so organised,” she said.

Sharing about her first pregnancy, Deshmukh said that she was really anxious a week before the baby was to be born because this was her first time and they did not know what to do.

Suggested Reading: The Kids Are Back Home, Again, And Mothers Are Losing Their Mind

Both she and her husband felt like 17 years in their head even though they were around 27-28 years old. “Because here we had googled too much and have heard a lot from many people but you just know when the baby is in your hand. You just know what to do and how to do it. I was so lucky to have such a loving husband. He was with me the whole day. Within the first week, I went for a drive, I went for coffee and everyone was like 14 days you are supposed to be in and cover your ears. We had asked all the scientific questions to our doctor. Having my husband by my side really helped me through. For me, I had the most beautiful post-pregnancy,” she said.

“To strike a balance is a little difficult because you need to handle both aspects of life. Especially with the pandemic, lines have become blurred because now your kids are home all the time, your work is also at home,” she said.

Everyone at the office understands, even if she is at narration and asks for two minutes because her kids have called, she said that they understand.

“All our mums and the mothers out there, we are natural multitaskers and all of them plan the day in such a way that everything gets taken care of. Everyone tells me that you give instructions on what they will eat for breakfast, lunch and dinner, then you are at the office and then you know minute things what is happening with them. I just do and I cannot explain how,” she said.